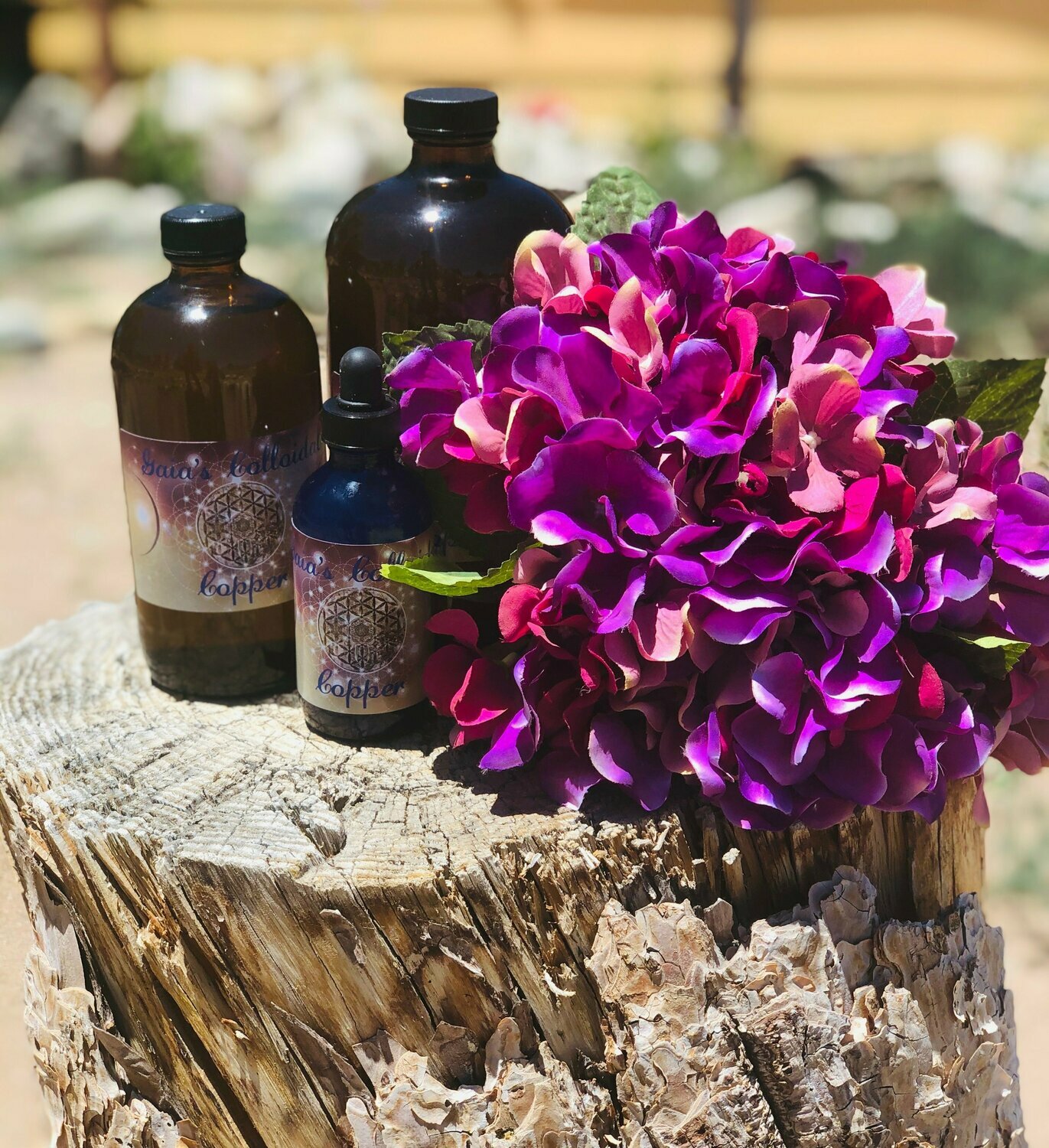 Helps maintain the integrity of connective tissue in the heart and blood vessels.

Plays a role in bone formation.

Plays a role in the metabolism of the neurotransmitters norepinephrine, epinephrine, and dopamine.

Functions as an antioxidant.

Copper is known to play an important role in the development and maintenance of immune system function.

assists those in getting off substances and prescription drugs

Copper use by humans is a long and varied, dating back nearly 10,000 years with multiple applications. Copper is, in fact, humanity’s first metal and shows up in Sumerian and Egyptian metallurgy circa 3900 BC.

Copper has many properties which make it nearly indispensable to modern civilizations. Copper is an essential nutrient to all high plants and animals. In animals, including humans, it is found primarily in the bloodstream, as a co-factor in various enzymes, and in copper-based pigments. In sufficient amounts, copper can be poisonous and even fatal to organisms. Due to the fact that copper is such a wonderful physical conductor of electricity and heat, it is also considered the conductor of the spiritualist's belief system. According to myths, copper has the ability to conduct spiritual energy back and forth between individuals, crystals, auras, the mind and the spirit world.

It is also believed that copper has the power to amplify thoughts when sending and receiving psychic communications. New Age followers carry copper with their stones and crystals to 'straighten' the properties of them, as well they are used when crating crystal wands to be certain of their clear and straight powers. Copper is also quite instrumental in the physical and mental healing rites of many peoples of this world.

Medicinally copper has been used for thousands of years. Ancient cultures recognized copper as a healing mineral. Copper was found useful for its healing powers both internally and externally. It is still used in the treatment of wounds and skin diseases, as well as internal diseases, anemia, cancer, rheumatoid arthritis, and heart disease. It is also used for its healing properties in improving circulation of blood, increasing energy and detoxification of the body. Copper is considered a mineral to increase energy and mental agility. In legend, copper is said to be the metal of the God Hermes, who facilitates mental agility, and quick wit.

Physically copper is used in traditional Folk remedies to bring additional energies for all types of healing, treatment for arthritis, relieving pain of broken bones, sexual instability and low energy.Copper jewelry is said to ease joint stiffness and arthritis by opening the flow of blocked energy. In this way Copper supports the body’s natural healing process.

Metaphysically Copper is known to stimulate the flow of energy and enhance psychic abilities. Known as an energy conductor copper can move energy, amplify thoughts, assist in channeling and communicating with higher dimensional beings. Copper has the ability to ground and transfer a wide array of vibrational frequencies from the spiritual to the physical. Copper is known to support healing by keeping the pathways for healing open. The many benefits to wearing copper make it a wonderful alternative to sterling silver.

Beginning in the 1970s in the United States, copper used as a healing agent began to increase. People who believe in its power esteem it as a very powerful assistant with arthritic and rheumatic diseases, but also look to it for its healing properties in improving the circulation of blood, increasing energy, detoxification, reducing inflammation, stabilizing metabolism and improving oxygen use.

Copper is an essential micro-nutrient. It is needed for red blood cell formation, protein metabolism, the production of RNA, enzyme activity, hair and skin color, and the health of the nerves.

If you take large amounts of Vitamin C, you need more copper. Colloidal Copper has been used as a remedy for gray hair, burns, arthritis, parasites and viral and bacterial infections.

Colloidal metal supplements are used to treat deficiencies of metals in the body and boost its immune system. The water acts as a vehicle for delivering the metal to the digestive system. Copper supplements have been found to act as an anti-inflammatory as well as treatment for wounds and burns.

Save this product for later

Gaia’s Whole Healing Essentials is a nonprofit charity, which functions as a spiritual organization dedicated to the healing of Mother Earth and Humanity. We gathered together as a team, to share our collective ideas and skills in doing so we have created the highest selection of products to assist with accessing whole healing.

Our products heal any and all diseases, ailments, energetic imbalances and more, as everything is vibration, we have ensured Divine vibration is assimilated into each product. What sets us apart from other manufactures, is our ancient knowledge of holistic medicine, our experience, awareness and pure conscious intentions. The products we hand make are created through conscious awareness of our own energetic systems, through meditation, positive intention and prayer. The Key element to all of our creations/products is Love. It is Love that changes the composition, vibrations and frequency of our products. This in turn allows the highest healing benefits for those who acquire our products.

We continually experience expansion through the connections we create with various people around the planet, we have conducted over 100,000 healing sessions and intend to expand into working schools, physical therapy, child wellness, animal care and more. We are aware that Our healing practices render the pharmaceutical and medical industry obsolete and we look forward to Being the primary holistic medicine provider on the planet. Our creations include; colloidal silver, colloidal gold, CBD oils, body butters, crystal wands, and more. Support our Go Fund Me charity and help make his a reality. A reality where we are able to grow our own ingredients, research better alchemical breakthroughs, provide crystalline schooling for children and more. The are no limits when flowing from the Heart, with pure intentions. Our objective is Unity Consciousness with all, healing not only humanity, but the planet as well.

Currently we are looking to expand our operations to house Our 20+ member team in hopes to create a new healing center, a place to expand upon new products and tools and to mass produce them for schools, physical health institutions, government sectors, animal health and so much more. Our expansion also involves New Earth for children. We have a home and land in our hearts from which we can grow and prosper

We are a Non-Profit Charity co-operation dedicated to raising the the Planet into Unity Consciousness. We are One in the Heart With Our sacred Mother, who we pray to daily.

All proceeds from this go directly to our special projects aiding and assisting in Mother Earth's Healing.

Disclaimer: We are not medical professionals and cannot offer any medical opinions or diagnoses, nor do we provide any FDA approved advice or products. However, we do provide our personal experiences of healing and success using colloidal silver and other alternative medicines, as well as the guidance of its amazing healing properties from Mother of All Creation. We suggest that the use of colloidal for healing purposes be used in conjunction with all of our spiritual techniques and tools. We do not guarantee or make any promises of its effectiveness in healing or curing any diseases or illnesses, as every being must take responsibility for the healing of their personal energetics. We do guarantee that each bottle of colloidal has been made in pure consciousness, with loving intention, and infused with Kryolite crystals and moon bathed for purity. We hope you enjoy our product and feel the love we have poured into it.

I was guided to apply Gaia’s Love Body Butter and Blessed to Receive such a High Vibrational healing product. As I applied the Butter I felt a profound sense of Self Love and Joy come over me, feeling Mother’s energy flowing to my hands, a soft, beautiful, nurturing and warm Healing Energy.