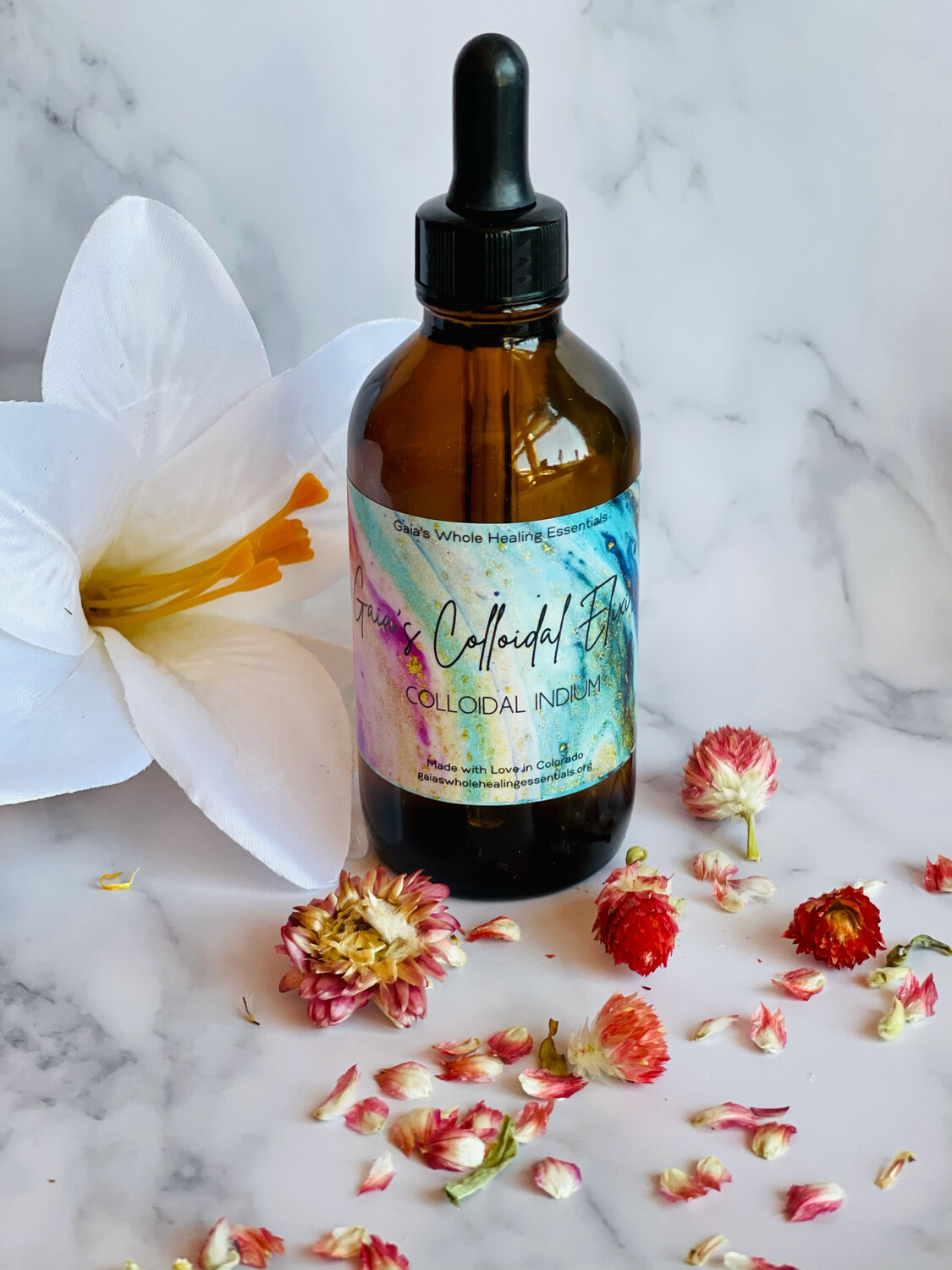 Our Colloidal Indium is a fascinating metal that has been shown to assist with migraines and energy boosting for the body. It has a rainbow glow to the colloidal which assists the light body to begin anchoring in. All of our colloidals are made with pure plasma and in the highest vibrational field on the planet.

Loss of hot flashes from menopause

Reversal of signs of aging

Healthcare providers sometimes give an indium compound called indium pentetreotide by injection into the veins (intravenously) as a treatment for cancer that has spread to the bones.

Indium is an exciting new discovery that somehow has fallen "under the radar." But there's even a book about it - cleverly titled "Indium" - in with author Dr. Robert Lyons states, ""Let Indium turn back your biological clock. Researchers believe that Indium may help you look and feel years - even decades - younger." He states that Indium users report a burst of youthful benefits including more energy, -enhanced senses of smell and taste, weight loss, more restorative and rejuvenating sleep, improvements in skin and hair tone and color, increased libido, and better moods.

Indium has been shown to have age-related benefits, including improving memory, increasing libido, keeping weight stable and regulating blood sugar levels. However, new research has found that indium helps improve the absorption of essential trace elements - such as copper, manganese, and chromium, copper and zinc - in the body, thereby allowing them to perform their functions more efficiently.

Dr. Henry Schroeder, author of "The Trace Elements and Man", found in his early studies that Indium supplementation increased the utilization of trace elements by 142%.

A book on Indium stated that it might well be the new miracle mineral. "Just a few drops of it a day," according to one researcher, "produces a cascade of hormones we enjoy when we're in our 20s." Indium has marked antiaging properties, and assists in converting creatine to ATP, or adenosine triphosphate. ATP is simply described as muscle fuel, and maintaining it at a high level keeps it from degenerating to ADP, or adenosine diphosphate, which when produced begins the manufacture of lactic acid, weakening the muscles.”

These statements have not been evaluated by FDA and are not intended to prevent, cure or treat disease.

Save this product for later

Gaia’s Whole Healing Essentials is a nonprofit charity, which functions as a spiritual organization dedicated to the healing of Mother Earth and Humanity. We gathered together as a team, to share our collective ideas and skills in doing so we have created the highest selection of products to assist with accessing whole healing.

Our products heal any and all diseases, ailments, energetic imbalances and more, as everything is vibration, we have ensured Divine vibration is assimilated into each product. What sets us apart from other manufactures, is our ancient knowledge of holistic medicine, our experience, awareness and pure conscious intentions. The products we hand make are created through conscious awareness of our own energetic systems, through meditation, positive intention and prayer. The Key element to all of our creations/products is Love. It is Love that changes the composition, vibrations and frequency of our products. This in turn allows the highest healing benefits for those who acquire our products.

We continually experience expansion through the connections we create with various people around the planet, we have conducted over 100,000 healing sessions and intend to expand into working schools, physical therapy, child wellness, animal care and more. We are aware that Our healing practices render the pharmaceutical and medical industry obsolete and we look forward to Being the primary holistic medicine provider on the planet. Our creations include; colloidal silver, colloidal gold, CBD oils, body butters, crystal wands, and more. Support our Go Fund Me charity and help make his a reality. A reality where we are able to grow our own ingredients, research better alchemical breakthroughs, provide crystalline schooling for children and more. The are no limits when flowing from the Heart, with pure intentions. Our objective is Unity Consciousness with all, healing not only humanity, but the planet as well.

Currently we are looking to expand our operations to house Our 20+ member team in hopes to create a new healing center, a place to expand upon new products and tools and to mass produce them for schools, physical health institutions, government sectors, animal health and so much more. Our expansion also involves New Earth for children. We have a home and land in our hearts from which we can grow and prosper

We are a Non-Profit Charity co-operation dedicated to raising the the Planet into Unity Consciousness. We are One in the Heart With Our sacred Mother, who we pray to daily.

All proceeds from this go directly to our special projects aiding and assisting in Mother Earth's Healing.

Disclaimer: We are not medical professionals and cannot offer any medical opinions or diagnoses, nor do we provide any FDA approved advice or products. However, we do provide our personal experiences of healing and success using colloidal silver and other alternative medicines, as well as the guidance of its amazing healing properties from Mother of All Creation. We suggest that the use of colloidal for healing purposes be used in conjunction with all of our spiritual techniques and tools. We do not guarantee or make any promises of its effectiveness in healing or curing any diseases or illnesses, as every being must take responsibility for the healing of their personal energetics. We do guarantee that each bottle of colloidal has been made in pure consciousness, with loving intention, and infused with Kryolite crystals and moon bathed for purity. We hope you enjoy our product and feel the love we have poured into it.

I was guided to apply Gaia’s Love Body Butter and Blessed to Receive such a High Vibrational healing product. As I applied the Butter I felt a profound sense of Self Love and Joy come over me, feeling Mother’s energy flowing to my hands, a soft, beautiful, nurturing and warm Healing Energy.